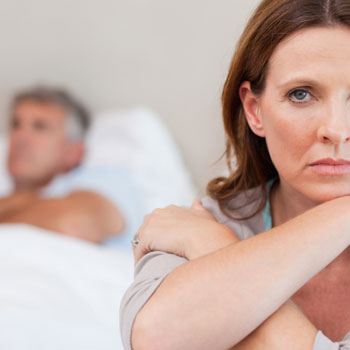 Intimacy in the form of sexual intercourse seems to be par for the course in most relationships. But a growing number of couples have sex rarely - or not at all. The definition of a sexless marriage or relationship can be blurry, but some experts call it when couples have sex less than 10 times per year. A surprising amount of relationships are considered sexless - the New York Times estimated in 2009 that 15 percent or more couples hadn't had sex in six months. But is it normal and OK for couples not to express intimacy with sex? There's no clear-cut answer, but it's worth examining why there's no sex. Is there a mutual lack of desire? Other emotions, like low self-esteem and longstanding anger among partners can facilitate a relationship that phases out sex. Usually, problems outside the bedroom find their way in, so it's important to get to the bottom of any issues you have with your partner before tackling the sex issue. It's hard to lay blame when someone's feelings are hurt, but a little introspection can be helpful.