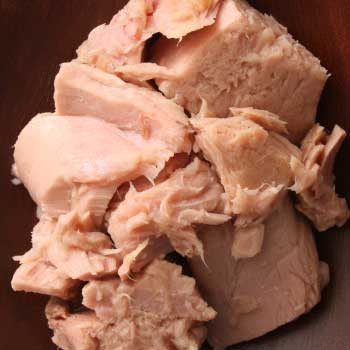 Like a fish in water -- not oil. Fish such as salmon and tuna are rich in omega-3 fatty acids which reduce total blood fats, lower bad cholesterol and raise good cholesterol. Although fresh tuna is the best way to go, canned tuna is often most affordable and convenient. Be careful when making your selection. While fish packed in oil may be the moistest, it is higher in fat. The oil is also rich in omega-6 fatty acids, which people tend to get too much of. Go for tuna packed in water or broth. If you're dieting, then tuna can be one of the best and most inexpensive protein sources. It's also quick to prepare, but think outside the mayo and relish. Drain the tuna and add a little soy and fresh grated ginger to the tuna. If you'd like to make it heartier, then add it to cooked brown rice for a one-dish meal.


Celery, fresh dill and a little Dijon mustard make a tuna sandwich fancier, and if you like spice, then try mixing in some salsa and a little diced green chile. Spoon over baked tortilla chips and sprinkle with cheese, then place under the broiler until cheese melts. Replacing high-fat ground beef with tuna can make a great lower-fat burger - mix a can of tuna with two egg whites, 1/4 cup plain oatmeal and a sprinkle of garlic, onion powder and pepper. Form into a patty, then brush with BBQ as you cook in a skillet. Use your favorite fixings on a whole-wheat bun for a satisfying burger fix.