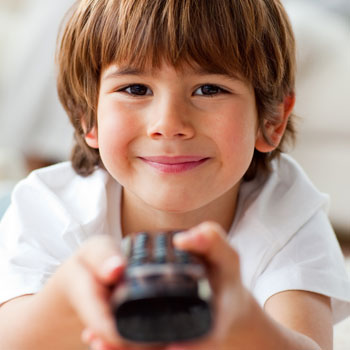 Television, in moderation, can be a relaxing, enjoyable activity for all ages. With such a variety of shows to choose from, there is something for everyone. Here are some great TV shows that can be found on the air or are available on DVD. We've broken everything down into age range and genre for an easy-to-reference guide.

For those times when you crave something that will have you sitting on the edge of your seat:

Supah Ninjas - A kid discovers he comes from a long line of ninjas and must battle villains. George Takei stars as his grandfather.

Kim Possible - A teenage girl and her boyfriend are secret agents who fight villains.

Merlin - Taking place during medieval times, based on a wizard's relationship with Prince Arthur.

Human Target - Loosely based on the comic book character of the same name.

Hawaii 5-O - A reboot of the old show from the '70s - Dano and his partner McGarrett fight crime on the big island.

The River - A documentarian, left for dead in the Amazon, is suspected to be alive and capturing videotape of strange happenings.

For those who prefer an imaginary, fantasy world:

Transformers - The Autobots battle the Decepticons. Modeled after the popular film series.

Goosebumps - Based on the popular books by R.L. Stine, each episode delves into a creepy adventure.

Once Upon a Time - Fairy tales come to life in a modern-day town, complete with evil queens and princesses.

The Walking Dead - A comic book series come to life in a post-apocalyptic world that's overrun with zombies, it follows a group of survivors.

American Horror Story - Follows the story of the living and non-living who inhabit a cursed house.

When you need to tune in and enjoy a few belly laughs:

That's So Raven - Heroine uses psychic powers, disguises and talent to get out of humorous situations.

Jessie - A teen who comes to New York City to live out her dreams becomes the nanny for a rich family.

Big Time Rush - Based on 4 teen hockey players who go to Hollywood to become a boy band.

The Middle - Follows the mundane yet hilarious lives of a family living in the Midwest.

The Office - A show that follows the lives and work days of inhabitants of a paper company.

Modern Family - Mockumentary comedy that follows the lives of a family.

Good Luck Charlie - A family adjusts to their 4th child, with another one on the way.

Because you're never too young or too old to learn:

Bubble Guppies - Fishy friends teach kids about a wide range of topics like dinosaurs, colors and recycling while reinforcing lessons in literacy, science, math and more.

The Electric Company - Modernized version of the 70s show that includes teaching 4 to 5 vocabulary words.

Planet Earth - An 11-part series that extrapolates the concepts of the popular Disney movie, exploring remote areas of the Earth.

Shark Week - A classic event that airs once a year, Shark Week episodes and DVDs are always available.

Reality TV is among the most popular forms of entertainment available:

Chefs A'Field: Kids on the Farm - Teaches how foods are grown, harvested and prepared.

30 Days - A documentary about people spending 30 days in the shoes of someone else. The show's three seasons are available on DVD.

The Biggest Loser - Contestants compete to lose the greatest amount of weight.

Intervention - Families try to help their loved ones face addiction.

Life - The classic board game comes to life, families compete for cash and prizes.