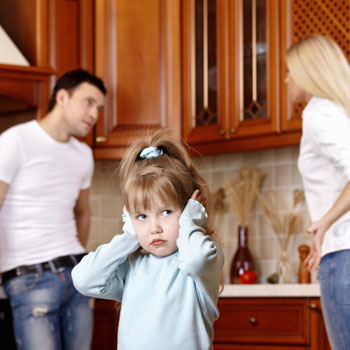 It goes without saying that when your kids witness you and your partner having a knock-down, drag-out argument, complete with screaming and slamming doors, it has an effect on them. So is it ever OK to fight in front of the kids? The answer may surprise you - it all depends on how you fight and what you fight about. A recent study notes the obvious - kids are most negatively affected by physical or verbally abusive fights and fights about them. Surprisingly, fights that result in the silent treatment are just as detrimental. None of these ways of trying to solve an argument are particularly effective, so why bother anyway? Having a disagreement in front of the kids and working it out appropriately actually can benefit kids. When they see their parents listening to each other, responding with respect and kindness, and resolving the issue peacefully, it actually teaches them conflict resolution.


Parents set examples for their kids in most every interaction; why should interacting with each other be different? Sometimes, it seems impossible to solve an argument peacefully. This is when parents need to act like adults and continue the conversation later, away from the kids. However, going behind closed doors to hash it out angrily isn't the answer - children will connect the dots when their parents emerge red-faced and hostile. But even the best parents lose their cool sometimes - as long as it doesn't become violent, it's OK to apologize after an argument escalates. Something along the lines of, "I'm sorry you saw Daddy and I arguing. We should've used inside voices and been kinder to one another, and we'll try to be nicer to each other in the future. We still love each other and you very much." But don't use this as an excuse to fight frequently in front of your kids - eventually, that apology will wear thin.