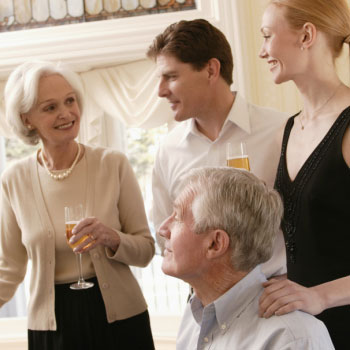 They're comedians' punchlines, the subject of country music songs and a giant pain in your butt - but they don't have to be. We're talking about your mate's parents - the in-laws. There's a stereotype that in-laws cannot and will not ever get along, but it's actually possible not only to get along, but also to love your mate's family. If it's early in the relationship, there's good news. You'll have plenty of time to get used to them, and they'll have time to get used to you. As they say, familiarity breeds affection, meaning the more you're exposed to each other, the better you'll get along. The same goes for if you've been avoiding your in-laws throughout the duration of your relationship. Try spending a little time around them instead of avoiding them to see how they tick. Before you get together with your in-laws, put yourself in a calm, friendly frame of mind so that you'll project positivity - and likely receive it in return.


Set aside those petty bickering topics like religion and politics, topics that you just know will become bones of contention when you spend time together. You're not going to change their point of view, nor will they change yours, so why create bad blood over it? And the kids - if and when you have them - may be the point on which you don't agree with your in-laws. Again, not sweating the small stuff is the way to go. If their way of caring for your children is loving and not abusive, then it should be easy to let bygones be bygones. Your children are your children, after all, and they model your behavior most of the time, not their grandparents'. Finally, find ways to be grateful for the people who brought your mate into the world - without them, where would you be?