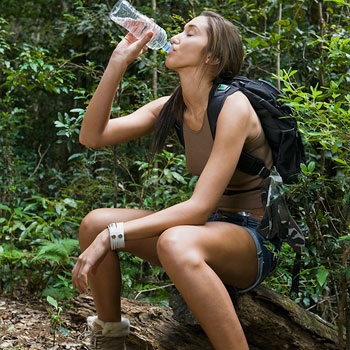 Hiking -- some define it as simply putting two feet down in rhythm, and so it is. It is walking extended in terms of time and glorified by specialized gear, which brings it in touch with a universe of diverse topics.

1. This is a diet sport. Putting those two feet down in front of each other for an hour on level terrain burns 400 calories. On elevated terrain, it burns 900. Figure in some of the rock or wood obstacles along certain paths and the numbers rise.

2. This is an exercise sport. Not only does hiking build leg muscle; it trains the cardiovascular system. Those fortunate enough to hike in hilly or mountainous terrain almost immediately elevate their heart rate upon beginning an ascent and easily reach oxygen debt. A 500-foot rise such as those common in Maryland's Catoctin Mountains offers up to 30 minutes of aerobic training, while a 1500-foot climb like that at British Columbia's Maligne Lake yields well over an hour's worth, enhanced by the weight of a daypack.


3. Hiking touches the high-tech world. Some of the most sophisticated knowledge of footwear mechanics in the world is at play within this sport. Hikers maintain constant demand for lighter weight footwear that simultaneously offers sufficient support on the uneven surfaces of trails. The changing conditions on trails demand fabrics that protect against moisture and reduce sweating yet hold in heat under the cold conditions that this all-season sport is practiced in. The result is a tendency to borrow from military fabrics tested on foot soldiers serving in extreme conditions over the globe.{relatedarticles}
4. Hiking is a sport touching the inner world through eloquent literature. The American hiker's chief literary companion, Henry David Thoreau, is regarded as a true master of the prose sentence and acknowledged as one of a handful of inarguably great American authors.

5. Hiking is a relationship sport. The hypnotic effect of placing those two feet down in rhythm enhances prostate health by increasing blood flow. Research proves that walking enhances sexual fantasy as well. Man is a creature built to walk and run and did so throughout thousands of years as he chased down game on foot, long before the automobile and office largely removed foot work from his life.


6. Hiking touches the green movement profoundly. For 50 years or more, its exhortation to "take nothing but pictures and leave nothing but footprints" has urged a gentle and selfless approach to life. Its international appeal dates back to ancient Greek physicians who prescribed walks as medicine and is updated almost daily with the awareness of new botanical health aids culled from far-flung corners of the earth. A friend from Peru familiar with hikes throughout the high country around storied Machu Picchu relates an anecdote featuring a tourist troubled by altitude sickness. His guide reached over for some of the fabled South American coca leaves and solved his problem by instructing him to chew them to relieve his symptoms.{relatedarticles}
7. Hiking is a family sport. There is a growing movement seeking to wrest the minds of children away from computers and expose them to the cycle of the earth. President Obama during his campaign alluded to the need for children to break away from the electronic world into the world of family.

Clothing designers, relationship experts, exercise and diet gurus, writers past and present, and a hiking guide in Peru are telling us the same thing: Man was meant to hike.

Bill Rozday grew up in western Pennsylvania and began writing at 13 years old. His latest work depicts a hike over a California mountaintop once hiked by Native Americans gathering obsidian to fashion into arrowheads. A poet as well, he has published in periodicals in Scotland and Australia. Bill is the author of The High Ground Books, a hiking series. For more information visit www.virginpinespress.com.