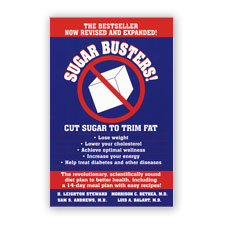 The simple approach here is to cut sugar to trim fat. That sums up the Sugar Busters program. According to the physicians who invented this concept, it is not fat or calories that contribute to obesity -- but rather an overabundance of sweets. Sugar causes the body to produce insulin, and too much of this insulin packs on the pounds. Look at your favorite snack or salad dressing and it is likely high in sugar, especially if it bears the fat-free or low-fat label.

This is not to say you have to cut out all sugar when following Sugar Busters. Instead dieters follow an eating program that works to lower insulin levels by mainly eating low-glycemic foods. A diet rich in high-fiber vegetables, lean protein, whole grains, and some dairy helps keep insulin levels regulated.

Among the foods that Sugar Busters has on their list of no nos are: beets, chips, candy bars, potatoes, corn, cakes, cookies, white rice, white bread, white pasta. These are all foods that cause blood sugars to spike, which notifies the body to produce insulin. With the increase of insulin, the body stores fat.

Rather than doing away with entire food groups, Sugar Busters calls for eliminating processed foods, fast foods, high-fat and high-sugar foods, which all have negative effects on the body. Portion control is also heavily emphasized.

It is also important to drink between six and eight glasses of water a day when following this form of diet.
The creators of Sugar Busters also stress the importance of eating right before bed. This will raise insulin levels and encourage cholesterol production which occurs when a person is asleep. Twenty minutes of exercise, four times every week is also recommended.

The plan breaks down to 40 percent carbs, 30 percent protein and 30 percent fat, a ratio that is found in the Zone and the G.I. Diet. Following the Sugar Busters plan reduces the risk of diabetes, hypertension and vascular disease.