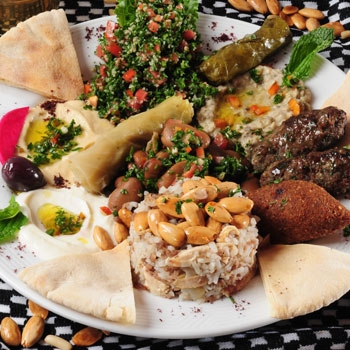 A visit to an authentic Greek restaurant is a treat. The minute you step inside you'll be assailed with wondrous smells of roasting meats, the sounds of bouzouki music and the amazing sight of a waiter igniting a dish of saganaki!

Greek dishes are some of the most flavorful of any cuisine. And why not? Many dishes use robust garlic, savory oregano, tangy lemon, cinnamon and more. The good news for those who want to eat healthy while eating Greek is that the layered flavors won't let you feel deprived. The bad news is that bechamel sauces, rich cheeses like feta, mizithra and Kefalograviera and lots of olive oil are all part of the cuisine, as well.

It's okay to go with an appetizer: a quarter-cup serving of hummus dip is about 100 calories yet gives almost 10% of the fiber needed daily. Use one slice of pita to scoop it up and it won't cause any dietary troubles because it's fat-free and only 90 calories. Falafel is another good choice, even if it is deep-fried. Made from chickpeas and fava beans, one piece is under 50 calories. Dolmades (stuffed grape leaves) are high in protein, low in fat and are about 75 calories for one appetizer side roll.


Be careful of baba ganouj, a potato-based dip. A small two-tablespoon serving is close to 100 calories and 13% of the fat RDA. It should go without saying that the flaming saganaki is to be avoided. Cheese drenched in ouzo and ignited cannot be good for you, but it certainly is fun to watch. Let diners at other tables order and then just sit back and watch the show. If your meal comes with traditional soup or salad, you may want to go with something a little less calorie-laden. Avgolemeno soup (chicken with rice and egg in a lemony broth) is delicious. It is also over 300 calories per serving and covers 26% of the RDA (recommended daily allowance) for fat and 35% of the RDA for sodium. A standard serving of Greek salad (greens, tomatoes, cucumbers, feta cheese, kalamata olives and Greek dressing) will not only cost 384 calories, it also provides a whopping 46% of the fat RDA and 39% sodium.

Main dishes in Greek restaurants are simply wonderful. Unfortunately you should steer clear of pastitsio (sort of a Greek lasagna) as well as the popular moussaka (meat, eggplant and potato). Both are smothered in bechamel sauce before being baked. High calorie, high fat, high sodium.


Fortunately there are many other delicious choices to select from. A broiled lamb chop is very high in protein and under 200 calories. Souvlaki (lamb kababs), spit-roasted chicken (minus the skin), garlicky shrimp or any broiled fish would be a good choice. What about the perennial favorite, the gyro sandwich? It's a caloric nightmare, clocking in at close to 700 calories. It's not the pita or the tomatoes or onion that do the damage. The tzaziki sauce (yogurt or sour cream with garlic and cucumber) isn't too bad in moderation. It's the gyro meat, which is frighteningly high in fat content. If you're craving one and nothing else will do, either order a child's portion, or order the adult sandwich and eat only half.{relatedarticles} There's nothing for dessert that's safe on a Greek menu. Baklava, kaitife, galaktobouriko and loukomades are delicious and all are either drenched in syrup or honey, made from phyllo dough, deep fried, brimming with nuts and/or all the things that are oh-so-bad for you.


In any case, who has room for dessert after eating a delicious Greek meal?