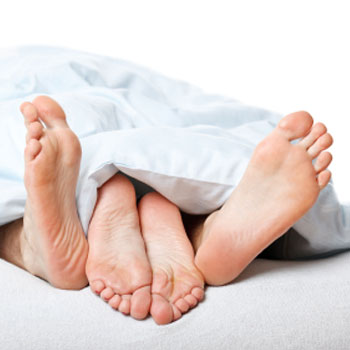 Everybody know the allure of getting some strange, but some people take it to another level.

We're talking about sex with a stranger. We've seen it in porns or even our favorite rom-coms. However, there's a fine line between fiction and fact. Before you get busy with someone you've never met, there are some things you'll definitely want to keep in mind. After all, you're talking about risky business.

Studies show that men are much more likely to agree to have sex with a stranger, but that's probably not much of a surprise. In a test done on the street, when approached by a beautiful woman, 97% of men agreed to go back to her place for a drink, and 83% were ready for sex right away.

Even with average-looking women, 60% of men were agreeable to sex immediately. However, when the tables were turned, less than 1% of women agreed to sex with a stranger.

What does this mean for women? Well, if you're looking for a man to have a casual encounter with, and you're at least decent-looking, you should have no problem. It is unclear why men are so willing to have sex with someone they don't know.

Is it just because of the prospect of sex? Or is it because of evolution and the innate need to spread their seed? In any case, if you're turned on by the thrill of casual sex, remember that it's better to be safe than sorry. Keep these things in mind when planning for the unthinkable.


Tips to Plan Your Night of Stranger Sex

The first thing you want to consider is location, location, location. Some people may go to bars and hook up there. Others may feel uncomfortable picking up one-night stands at the local watering hole. Find out what you feel most comfortable with in terms of meeting people for casual sex. If you aren't comfortable doing your own dirty work, there are plenty of Internet hotspots to do it for you.

Many dating and sex Web sites will ask you questions about your sexual preferences so they can hook you up with like-minded individuals. Remember, these people are looking for casual sex, just like you. So odds are you'll have no trouble finding a willing participant.

Once you think you have found the perfect match for your random hook-up, engage in a little chit-chat. While you probably aren't interested in the person's life story, you do want to break the ice. Attempting to jump right in the sack can sometimes be a major turn-off. Of course, some people believe that less is more when it comes to small talk. Assess the situation to determine if you're both on the same page.

Keep in mind -- you probably don't want to spend hours talking and end up missing your opportunity. Plus, the last thing you want to do is get personal. As with talk, when it comes to biographical info, less is more. Remember, you're just looking for sex, not a long-term relationship. On the flipside, it's important to remember that you know nothing about this person. You are entering into this sexual arrangement at your own risk.

Once you have your rendezvous planned, decide on a neutral place, such as a hotel. Never, ever take someone who you just met back to your place, nor should you ever go to his or her place. Before you go anywhere, it's best to let someone know where you will be going. For obvious reasons, you should also carry your cell phone with you. Take all the proper protections not to put yourself in harm's way.


Enjoy your night of sex with no strings attached, but play it safe. Be prepared with condoms and insist your partner wears one. Don't let your guard down. Be ready with a plan in case things don't turn out as planned.

Probably one of the biggest benefits of stranger sex is that you get sex without all the stress and drama of being in a relationship. It's truly a case of no strings attached. If you haven't had sex in a long time, it's a fun way to get your rocks off. Or maybe you do have sex often, but are looking to spice it up a bit. Stranger sex can give you the thrill of sex with someone you don't know.

But everything is a trade-off. Like all enjoyable things in life, there are some serious stranger dangers. If you escape with your life, you're still at risk for a whole host of other issues. Probably the biggest risk of having sex with a stranger is contracting a sexually transmitted disease (STD). Even if you are on birth control, it is important that you have the man wear a condom. If you proceed without protection, the chances are good that you may end up with more than just a great night of sex. Remember, you probably aren't his first ride at the stranger rodeo.

Not only can you get an STD, but you also can get pregnant. This means you can end up raising a child by yourself or terminating the pregnancy. Because more than likely, your perfect stranger will be long gone. Although you want the night to be memorable, it shouldn't haunt you for the rest of your life.


Another risk is that you don't know this guy you're about to sleep with. At all. For all you know, you may end up sleeping with a murderer or rapist. And if you've met him on the spot, it's highly unlikely that you'll have any time to look up this dude on his Facebook page or learn his criminal history.

Unfortunately, there's not really any way to avoid this risk because chances are, he won't tell you his real name. You'll need to be able to establish trust with someone in a short amount of time, which isn't always easy.

Should you do it?

Now that you are a little more familiar with the concept of stranger sex, you can decide for yourself if it's hot or not. It will depend on your sexual fantasies and beliefs, as well as whether you feel the benefits outweigh the risks. Obviously, it's a personal choice that only you can make.

It's not right for everyone. Many may feel it is morally inappropriate because of their sexual beliefs and that's fine. However, as long as you play it safe, stranger sex can give you a night of exhilaration, one that you won't soon forget. Of course, that pleasure could come at a very high price.