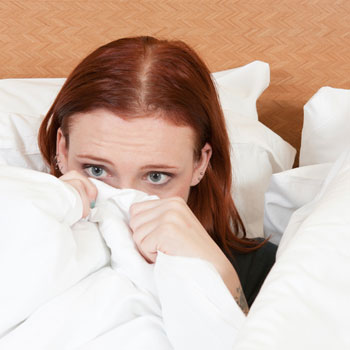 You're having sex and all of sudden something unexpected happens. All you want to do is crawl into a hole and never come out. However, someone else is underneath you ready to burst. What do you do?

Check out the 5 most cringe-worthy moments people experience when having sex. What? You thought you were the only one? Oh no. You definitely aren't solo in embarrassing sex blunders.

But now you can find out what others have experienced and what to do about it. That way, you can be prepared to deal with whatever happens during sex with a chill attitude so you can get back to what matters - sealing the deal.

Cringing Moment #1: Burp During a Kiss

Sometimes the air bubble forms in your stomach and escapes up your esophagus so quickly, there's no chance of swallowing while you are kissing. What happens? You share that burp with your kissing partner!


Many people will be able to catch it before it makes it to their mouth, so they simply move away from the kissing session to stifle it or release it away from their partner.

However, those who aren't so lucky will end up hoping their partner doesn't notice. If he does, you can just apologize and allow him to get over it while he starts doing some other pleasing things to you.

Have you ever had sex after a huge dinner? Your belly is full and there's ton of air in there with the food. As you start rolling around, the air escapes from your belly, floats down your intestines and comes out your butt. Uh oh, you just farted and it doesn't smell pretty.

Gas is a normal function of the body. Yes, many people do fart during sex. What do you do?

Don't let it ruin the moment. If your partner hears it or worse, smells it, have a laugh about it. You can quickly apologize but be sure to get right back down to business because the more you dwell on it, the harder it will be to get back into the groove again.

You're in the moment and you're about to release the sexual tension you built up and blurt out, "OH HENRY!" While it's a great treat to your partner because it shows he has pleased you - it's not so great when his name is Bob.

It's okay, with so many people in your life, it's easy to get confused in the heat of the moment - especially if you've been drinking. But what do you do when you accidentally slip and say the wrong name?

Keep going pretending nothing happened. With all of the intensity of the sex you are having, he may not have noticed. If he stops though, apologize immediately and go down on him to help him forget, if he lets you.

Now, if he is completely turned off because you just called him Henry instead of Bob, accept it for what it is - a mistake that can't be undone so you might as well get dressed and head out.

Here's an example of that exact thing happening:

Going down on him isn't the most desirable thing in the world when your man hasn't showered after a long day at work, which can lead to gagging. Another gag trigger can be when you slip and his dick hits your gag reflex.

Even though gagging isn't so bad, throwing up because of the gagging is pretty humiliating. Just imagine yourself having to stop pleasing your man so you can projectile vomit all over his chest.

So what should you do if this happens? Simply grab a towel, wipe it off and suggest moving over to the shower. That way, he can clean up, you can rinse out your mouth and then start all over again in a new romantic setting.


If he's over the moment and just wants to shower alone, face the reality that you won't be going down on him unless he's freshly showered. It may actually be a positive for you, as you don't ever have to deal with a stinky penis again.

How to Solve Any Embarrassing Moment During Sex

Embarrassing moments during sex happen to everyone. You don't have to be so embarrassed when you're making love with someone you care deeply about because that person won't care at all.

However, knowing what to do when something unexpected happens can hang you up anyway and that can lead to losing the moment. To keep that from happening, remember these three steps.

Step #3: Move on or accept it and have sex at another time

In most cases, the person you are getting it on with won't care so much about your embarrassing blunder. He will most likely want to move on and get on with the moment. So the next time you find yourself in bed with your lover and something unexpected happens, give yourself a break. It happens and sex will go on.