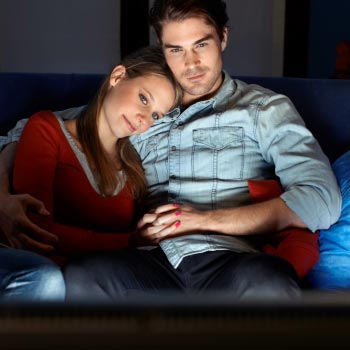 There's nothing like a night of chick-flicks with your girlfriends but watching movies with your man can be a completely different story. Instead of suffering through another slasher or action film, try these picks that will put you both in a romantic mood and can satisfy your need for sap and his need for masculinity.

High Fidelity - After John Cusak's character is dumped, he spends the rest of the movie contacting his ex-girlfriends to figure out where he's gone wrong. From the awkward to the hilarious and tragic, they all bring him back to where he belongs. Aside from a sweet and engaging story line the soundtrack has something for everyone and is one of the first big-screen appearances of Jack Black, and what guy doesn't love him?

The 40-Year-Old Virgin - While this may come to mind as a comedy at first, there is an underlying love story that shows the beauty of innocence and new love. Any male will love this movie as it's stocked with the usual sex jokes and unrefined humor of Judd Apatow movies, but there is enough of a romantic storyline to keep you interested - even if you snort-laugh along the way.

Groundhog Day - The Bill Murray classic is a funny and heartfelt take on the rom-com with an interesting storyline that hasn't been replicated. You'll be quoting Murray's witty quips for days after this one.


The Princess Bride - A cult classic that should belong in anyone's movie collection. This eccentric medieval fantasy flick is a lighthearted and heroic love adventure that both guys and girls will love and have fun remembering the times they've watched it growing up.

Forrest Gump - Along with being a story of romance, this epic spans action, comedy, and drama; however, the heart of the story lies in Forrest's undying love for his Jenny, which will make you tear up and believe in the earnest power of love all over again.{relatedarticles}

Bridget Jones's Diary - A refreshing take on the female role in the romantic comedy. Bridget Jones smokes, drinks, and curses, which is sure to appeal to your man, and every girl melts when Colin Firth's Mark Darcy utters the line "I like you just as you are."

Just Friends - A classic tale of reunited childhood sweethearts with a comedic twist. Everyone can relate to coming home for holidays and running into exes, but this one capitalizes on the humor of the situation while giving you hope that your unrequited love may still have a chance.


Titanic - Whether or not your guy digs the story of star-crossed lovers, Jack and Rose, he'll certainly appreciate the magnificent sweeping shots of the ship and when Kate Winslet infamously poses for her portrait.

Pretty Woman - The prostitute with a heart of gold, Julia Roberts, seduces businessman Richard Gere in an unlikely Cinderella story. Part comedy, part passion with classic 80s styling - this is one you'll both enjoy.

Legends of the Fall - Get your tissues out for this tearjerker. Brad Pitt and Anthony Hopkins carry this tragic story about not only love but family in a time of war.{relatedarticles}

Pearl Harbor - This has war scenes and planes for him and a love story and hunky dudes for you. If your dude is a history buff, he'll also enjoy the movie's historically accurate take on the events that led up to Pearl Harbor.

Love Actually - This British rom-com will keep your attention with an ever-changing and intertwined storyline that's both humorous and heartfelt. It can also double as a holiday movie to watch while you get cozy by the Christmas tree.


50 First Dates - Most guys love Adam Sandler and this movie can indulge their taste for boyish and silly humor while pleasing you with a cute but campy tale of a loveable Drew Barrymore.

Hitch - Will Smith and Kevin James' hilarious adventure in learning to be a ladies man provides side-splitting moments along with sentimental ones.

He's Just Not That Into You - Based on a book written for women by a man - how could your guy not love it? This comedic and realistic advice movie is sure to be a winner for movie night.

When Harry Met Sally - An 80s classic that takes on the questions "Can a man and woman ever be just friends?" You'll be on the edge of your seat waiting the whole movie when the "will they or won't they?" tension finally comes to an end. The adorable love stories in-between scenes are sure to steal your heart as well.

Shakespeare in Love - A smoldering and passionate story with an all-star cast of Gwyneth Paltrow, Judi Dench, and Ben Affleck, this classic tale of love, loss, and tragedy will not disappoint.


Something's Gotta Give - Your guy will love a classic, cool, and crazy Jack Nicholson while the ladies will swoon over the always romantic and endearing, Diane Keaton.

Never Been Kissed - Enjoy the awkwardness and pain of reliving high school crushes and prom all-over again with another winning Drew Barrymore feature.

The Wedding Singer - Another Sandler and Barrymore team-up that's as funny as it is sweet and you'll be dancing in your seat with the great and upbeat 80s soundtrack.

Atonement - This book adaption is a beautiful but tragic film about an ill-fated relationship during the pre-WWI era. You'll be left wanting more from this sad but soulful encounter acted out wonderfully by James McAvoy and Keira Knightley.

Romeo and Juliet - This updated and modern version starring Leonardo DiCaprio and Claire Danes keeps with the heartfelt sentiment of the original play but switches things up with a fast-paced, colorful rendition complete with a contemporary soundtrack.

10 Things I Hate About You - The late Heath Ledger stars in this romantic comedy based on the The Taming of the Shrew. This coming of age love story is also bursting with one-liners and silly moments.