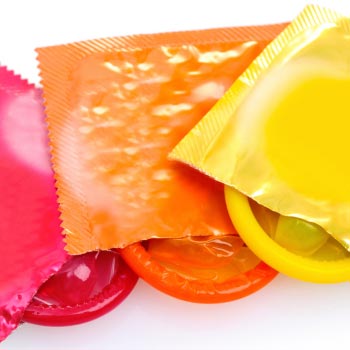 You know you should use them to prevent STDs and pregnancy, but what can you do when he says it lessens his pleasure? Well, a new study found that sex isn't necessarily better without a condom. Research published in the Journal of Sexual Medicine found that with and without a condom, both men and women rated sexual pleasure consistently high. However, researchers found that some men reported potentially higher arousal when having sex without a condom; however, arousal is affected by multiple factors, including drugs and alcohol, partner choice and many others. Michael Reece, PhD, MPH, of the School of Public Health-Bloomington, Indiana University, and co-author of the study, said "We've had generation after generation of men that have been told that sex with a condom doesn't feel as good as sex without, and in survey after survey you pick up that social myth," says Reece. Until now, that is: "People say that sex with a condom is just as good as sex without a condom -- that throws everything that men grew up learning out the window."
But if he still protests using one, then look to your choice of condoms. Today's versions have as many bells and whistles as a new car, so give a few brands a test drive. Premium lubricants and varied textures can enhance sex for both parties. Here are a few choices to get you started. Likely the thinnest latex condom on the market, Kimono Micro Thin Aqua Lube condoms claim to be 20 percent thinner than other companies' "thin" models, but they still stand up to rigorous testing. Don't like that condom smell? Try Durex Pleasuremax Tingling – it has a minty scent and will stimulate with ribbing and studs. Durex Performax contains a mild numbing lubricant, so he'll last a bit longer. And finally for the ladies, Trojan offers the Her Pleasure Ecstasy condom, coated with lube inside and out, plus it has special ridges. So stay safe and have fun with a condom.