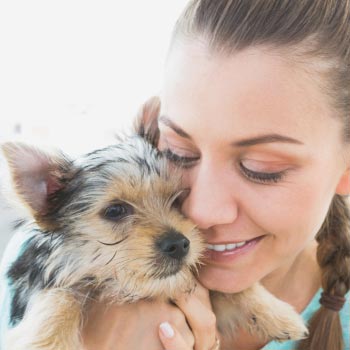 They're so cute and cuddly, and you know you love your pets. But why? And do they feel the same way about you? Researchers have looked into the effects having and caring for a pet have on people, and the results boil down to a chemical reaction. Specifically, loving and cuddling with Fifi or Fido produces a release of oxytocin in humans. Some scientists call this hormone the "moral molecule" or "love hormone" because it's involved in making us feel good when we're doing things for others or showing compassion for others. It's released during uterine contractions, and its synthetic form, Pitocin, is administered to expectant mothers to help them go into labor. The effects of oxytocin among humans has been widely studied, but only recently have researchers expanded their efforts to other species, namely pets. In a Japanese study, after taking a baseline measurement of pets' and their owners' oxytocin level, owners assessed their bond with their pets in a questionnaire.


Those with weaker bonds were separated from those with stronger bonds to their pets. The owners were instructed to sit in a room with their dogs and simply make eye contact or talk to, not pet the animals. Those who reported stronger bonds with their dogs saw theirs – and their dogs' – levels of oxytocin rise. And the longer those dogs who were more strongly bonded gazed at their humans, the more oxytocin they produced, leading researchers to believe that those sweet, gazing expressions on dogs' faces mean more than you might think – they really are a look of love. Another study found that there was no discernible increase in oxytocin with cats vs. dogs. But those who had owned mostly cats throughout their lives seemed to have less of an overall jump in oxytocin. Dog owners seem to be "trained" to expect that bond.