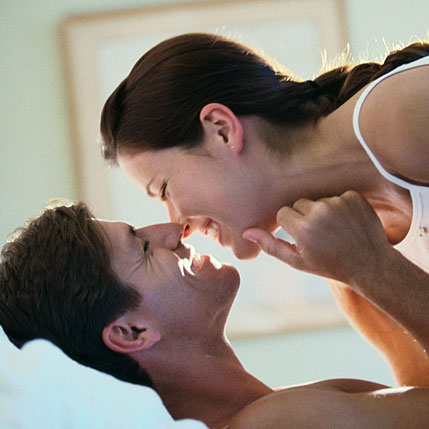 Sex is healthy - it burns calories, prevents heart disease, encourages low blood pressure, keeps your stress in check and tones up your muscles. As a matter of scientific fact, at least 2 orgasms per week can even increase your life expectancy. That's right: have sex often, live a long life.

Besides, if sex is what makes the world go round, then women are truly masters of the universe.

For a man, sex is natural, it's fun, and there's rarely a bad time to have it. There's plenty we can learn from this kind of attitude about sex and plenty of benefits to reap from having sex like a man.

Men are notorious for trying to rush straight to it, and while women typically chide this over-eager take on sex, it can be beneficial to your sex life to indulge in the occasional quickie.

The reason for the difference between the sexes on this one is pretty clear: men can go from zero to orgasm in as little as 90 seconds. It's downright rare for a woman to be able to accomplish the same feat, no matter how talented or well-acquainted her partner is with her preferences.


But skipping foreplay doesn't mean that it's all about getting to the finish line. Spontaneity can add unappreciated dimensions to your sex life. Experiment with a quickie in the shower before you start your day and you won't be able to wipe the grin off your face. Simply altering your normal routine can add excitement.

Just don't expect to have a mind-bending orgasm, although that's not necessarily out of the question. Also, don't you have other things to do? Check this one off the list and get to that Mad Men marathon you've been dying to start.

If your love life has hit a plateau (and not the good kind), then consider initiating sex and taking the lead. You know what you like and you're much more likely to get the satisfaction you crave if you handle the navigation for your partner.

We might not always think about it, but it's normal for men to feel a degree of pressure during intercourse, particularly when it's expected for them to take the lead. Any failure to excite may feel like a failure on their part, which can make some men less likely to try something different.

And, if you're like 80% of most women, orgasm from penetration might not always be a reality, so tell him what you like and what you don't, and don't be afraid to get on top. Not to mention, men love when women take the lead in sex.


Keep the Lights On

What grows by 30% when a man is aroused? That's right: the pupil of the eye. Men are visual creatures, and visual stimulation has a powerful effect on their arousal, but they're not the only ones. Women might enjoy sex in the light more if they were more confident in their bodies.

The truth of the matter is that you will always be more critical of your body than your man ever will. In all likelihood, men are far too enraptured by their sexual arousal to nitpick their own insecurities about their bodies - or yours.

Besides, men love a woman who's confident about her own body, no matter the size or shape. Your man already knows what you look like underneath your clothes, so why hide what you both know he likes in the dark?

So what can you do to increase your self-confidence? Work on it outside the bedroom, whether it's:

Have Sex Because it's Fun and Don't Fake It

Men are brought up by culture and society to believe that their enjoyment of sex is both natural and acceptable, but women are made to feel that if they enjoy sex, something is wrong with them. That's just downright untrue.

Have sex just for the fun of it. Men often act on their sexual impulses, whereas women typically repress them or turn their minds to something else. If you're in the mood, just make a move. Orgasms release feel-good chemicals in your brain that will help you relax and hormones that give your hair, skin, and even your nails a special shine.

Also - don't fake it. Men rarely, if ever, fake an orgasm, so why should you feel pressured into pretending you're satisfied when you're not? Men appreciate honesty, as long as it's expressed in a constructive manner.