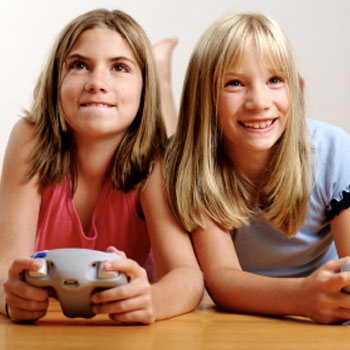 With a new set of video game systems coming out every few years it can be tough to decide the best system for your family's needs. Unfortunately, because this is technology we're talking about, "hand-me-downs" are mostly out of the question when it comes to game systems. Luckily, consoles are lasting longer between new versions and many family-friendly games can be found at reduced prices.

The first thing you need to consider when choosing a game system for your family is how you're planning on using it. Game systems come in two kinds: handheld systems and console systems. Handhelds currently are dominated by two companies; Sony, with the PlayStation Portable (PSP), and Nintendo, with the Nintendo DS. The 3 big players with consoles are Sony's PlayStation 3 (PS3), Microsoft's Xbox 360, and Nintendo's Wii.

There are pros and cons to each type of system and it depends largely on who is going to be playing video games in your family. If you are looking to buy a system for a single child then you can go either for a handheld or a console, since you only need to worry about one player. However, if you have multiple children or the whole family wants to get involved you will most likely want a console system that supports up to 4 players at once on some games.

The Nintendo DS is currently the top-selling system with 3 versions on the market: DSLite, DSi, and DSXL. There are many differences between the 3, but for this review we're focusing on the systems' shared features.

As a single-player system, the DS sports a huge library of games for every type of gamer. For the younger kids, there are games based on popular children's shows, educational games, and adventure games. Older kids can enjoy more mature titles, many that support multiplayer features either locally or over Nintendo's Wi-Fi connection. One of the biggest draws to the DS is the popularity it has found with older players because of its large library of brain-teaser and personal improvement titles.


A single DS console can serve the whole family with the right library of games. It's light, portable, and boasts a good battery life for long car trips. The DSLite basic system retails for $130 and games average $20-35 with many titles on sale at major retailers.

Cons: Only one player per system, need multiple systems for multiplayer games, may be too big for small children.

The PlayStation Portable system comes in 2 retail versions, the original PSP and the PSPgo. It makes a BIG difference which system you buy: the PSP needs game discs (called UMDs) while the PSPgo does not support game discs and gets its content from downloading over Wi-Fi networks.

Most new titles are available on both systems, but many older UMD games are not available on the PSPgo, so if you're looking to play a certain title you need to make sure it's on the right system. Both systems allow for the playing of movies, music, photos and Internet browsing. They can be connected to a PC to transfer media files and allow for memory expansion with a Sony Memory Stick.

The games available on the PSP are varied, but comprise mostly of mature titles with less focus on educational games. The majority of PSP titles are racing, fighting and adventure games, with online multiplayer games through local or Wi-Fi connections and media downloads from the PlayStation Store.

The PSP console retails for $170 ($200 for the bundle with a game, movie and memory stick) or $250 for the PSPgo. UMD games retail from $20-40 and are generally the same price as their digital counterparts available online at the PlayStation Store for download.

Of the 3 consoles, the Nintendo Wii stands out the most from the other two because of its innovative controller and family-friendly game library. The Wii has found notoriety in being helpful with physical rehabilitation and activity, especially in the elderly. Many nursing homes have brought in the Wii Sports and Wii Fit games as a low-impact exercise option for their residents. The controller motion technology can also help movement-impaired gamers regain dexterity and safely simulate playing sports that they couldn't in real life.

For the best family gaming experience, the Wii has the largest library of family-friendly titles with the most accessible controllers and game play styles. With 4 controllers and one console, plus a large library of exercise/motion-promoting games, the whole family can get moving and playing at the same time. Game discs from the Nintendo GameCube console can also be played on the Wii, although the system does not support DVD playback.

The Nintendo Wii also boasts the Virtual Console feature which allows you to download classic games from their older systems such as the original Nintendo, Super Nintendo, and Nintendo 64. Games are downloaded with WiiPoints; $20 for 2000, with a typical download costing 500-1500 points. The system retails for $200, games costing an average of $50 for popular titles.

The PlayStation 3 stands out from the console crowd as the only system with a Blu-ray player. It serves as an all-around media hub with the ability to play movies, music, photos, and browse the Internet. It shares connectivity with the PlayStation Store to download game content, media, and share these with the PSP handheld.

The majority of games on the PS3 system are mature titles with the most popular being sports, racing, and notably first-person shooting (FPS) games. The online multiplayer allows for ranking and competition in FPS games and many feature online voice or text chat.

The PS3 is the most expensive of the 3 consoles, currently retailing for anywhere between $250 and $400 depending on bundled features and hard drive size. Games are typically $50-60; some older models supported the play of PlayStation2 games, but this has since been discontinued in the current retail models.

Cons: Not as many games for younger players, expensive, no backwards compatibility.

Considered to be the "middle of the road" console, the Xbox 360 was the first of the current generation consoles to reach the market. Early models were plagued with the "Red Ring of Death" issue where the motherboard would overheat, causing system failure and many warranty issues. This flaw has since been mostly fixed in the new models, although some reports do still arise.

The game library still heavily favors mature titles, namely FPS games and sports, although there are many more family-friendly platform adventure titles as well. One of the notable "everyone" games the system supports is the popular multiplayer online trivia battle, "1 vs. 100".

Just like the PS3, the 360 allows for media playback of photos, video and MP3s, as well as connectivity to Microsoft's Zune media player. The Xbox Marketplace allows for game content and media downloads and also interfaces with Facebook and Twitter. Xbox Live, the online service, costs $50 for 12 months if you want the Gold membership that allows online multiplayer. The console itself ranges from $200 - $400 depending on bundles and hard drive size, with games normally $50-60.