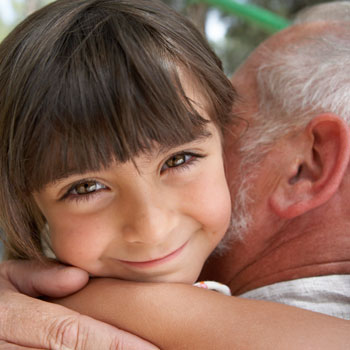 Grandparents Day began with the idea of honoring the elderly and championing the cause of the lonely in nursing and retirement homes. Marian McQuade, a housewife from West Virginia, brainstormed the idea, which was later to become a nationally recognized holiday, thanks to Jimmy Carter in 1978. Now the holiday is celebrated on the first Sunday after Labor Day, in September one of the first holidays of the school year that greatly affects most students.

McQuade, the original founder of Grandparents Day, is the mother of fifteen children, grandmother of forty, and great-grandmother of three. With so many descendants, she was well aware of the special bond that children should have with their grandparents. While mothers and fathers are the main source of discipline and example in a child's life, his or her grandparents have a profound affect on viewpoints. Without the wisdom of the grandparents, many children today wouldn't understand what it was like to grow up without the technology and amenities of today's world and wouldn't appreciate what they have nearly as much.
Another reason to celebrate our grandparents on Grandparents Day is simply because they help to raise us and shape us into the men and women we will become. It is said that it takes a village to raise a child, and in many families, grandparents baby-sit and share in the responsibility of "bringing up baby". With both parents entering the workforce today, coupled with rising daycare costs, retired grandparents have become perhaps the most dependable source of daily child care, meaning they are becoming more prominent in children's lives. And, while they've already raised a family of their own, most grandparents are willing and even eager to take part in their grandchildren's care and development.

Grandparents are extraordinary people. They have stories to tell that expand our horizons and views of life formed through years of experience that we cannot begin to fathom. We should feel lucky to benefit from this, and our grandparents feel privileged to be able to share these experiences with us. Overall, grandparents are a great resource for us, and if we can celebrate mothers and fathers, we can definitely recognize grandparents for their achievements in life.