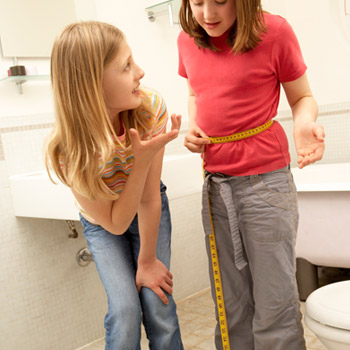 It is not a surprise to most people that health studies point to popular culture as a perpetrator of body image which has corresponded to the self image and well being of women AND men.

What may surprise you is that this is not a new phenomenon.

Is the rail thin appearance of runway and magazine models a new obsession which has started young girls and women on a path towards starvation, malnutrition and disorders such as anorexia and bulimia?

The western world created a popular culture of 'you can never be to thin' as early as the 20's when flapper styles caused women to starve and over exercise their bodies to attain the flat chested, androgynous look that was popular at that time.

The fuller figure did make a comeback during the depression, but quickly reverted in the 60's with thinness being equated with physical beauty.

Studies on self image indicate that women tend to consider themselves heavier than they really are. This distorted body image is linked to unhealthy dietary practices like anorexia and bulimia.

Although distorted body image affects men and women of all age ranges, it is middle and upper class women who are most commonly affected in thinking they are too heavy and need to lose weight. Girls as young as nine are following the paths set down by mothers, sisters and others.

On the other hand, men with body image problems often feel they are too thin and use of steroids by youths trying to build muscle mass shows that they are also adversely affected by media portrayals of the body.

Bad self image is learned. This can be clearly illustrated by a study conducted by WHO with Canadian students. The study showed that the confidence of children dropped dramatically through the pre-teen years. The percentage of 11 year old boys and girls who felt confident all of the time was 47% and 35% respectively. By age 15 the percentage dropped to 30% for boys and a disappointing 14% for girls.


What are we teaching our children?

In a quote from Health Canada based on a research program for VITALITY the following report was made: "Slimness in western cultures is associated not only with success and sophistication, but with character virtues. Conversely, obesity is the opposite of all these things and, particularly in the case of women, is associated with failure and a collapse of self-discipline."

Self image is tied to several factors, only one of which is body image. Self image is part of self awareness and starts early in childhood, even before speech. As we become adults many tie their self image to such factors as job success, relationships and abilities. Body image - if a person has a negative view of themselves physically - can be one of the most dramatic influences.

Health Canada's findings show that although self image may be subject to change throughout our life, our "fundamental sense of feeling worthy or unworthy (self-esteem) remains relatively stable". This means that it is while children are still young that the most impact is made on their future self image. Creating a safe, nurturing and loving environment can be the greatest protection against negative body image and low self-esteem.